I realize how little I got done last year, two blog posts here, one about trying to save our hound Gráinne, which we failed at, and a post about Wonder Woman which I never followed up with the review I intended on (it's a good movie that could have been much better on many levels, I still feel the lead was miscast, I hate that my favorite character who was only on briefly was actually a white-wash and, wow, they really could have had more women present in the entire thing). Other writing was a rewrite/reedit of an old article for the Lughnasadh issue of Air nAithesc and a few posts at The Sarah Connor Charm School about the reboot and Linda Hamilton's announced return, as well as James Cameron hating Wonder Woman for all the wrong reasons. I also moved/redesigned the SCCS site, my work site (such as it is at this point) and started to with Dùn Sgàthan and Hooded Crow but that got to be a bit too much. I'm still finding things that need fixing on the SCCS site, after all. So that was somewhat productive, at least. Just not a lot of writing.

The year was seriously distracting for me, after spending so much energy in 2016 towards saving both Gleann and Gráinne, we entered 2017 with my mate breaking his leg, failing to save Gráinne and then having one of our mare's, Misty, suddenly die and one of our Minis nearly die on the same day (possibly an emotional response to losing a herdmate). A couple of months later, my mare Saorsa, who had been devastated by the loss of her beloved boss mare, went lame. Then she went lame in another foot. She ended up with abscessing in all four feet, about the time one would open and start draining another would show up. Oh, we also nearly lost our house, due to the toll trying to save our dogs took on our finances....yes, even with the fundraising and auction and all. And there was some political stuff happening in the world as well, which some of you may have noticed, that has been damn horrific. :/

I also "pulled something in my shoulder" working on Saorsa's feet in the late spring. Which refused to get better. I continued to try to stay in shape and do what I could to take care of her, the other animals and things here. It would just go away, right? First practitioner (a PA-C, seeing doctors here is usually a long wait), indeed wrote it off as nothing...she also "joked" that I should just sell my horse so I didn't have to use my arm anymore which probably means it's best for her I was in too much pain to do what would come naturally to that sort of crack. I spent the summer pretending it would just heal up. Meanwhile, my plan to get my fitness business reestablished, as all work there went south taking care of my dogs the year before, was impossible. I was now taking care of a horse in between being in too much pain to even train myself. Oh, I kept trying. And, at least, I could run.

While doctors might be hard to find up here, sometimes you do luck out. I went back and saw a nurse practitioner at the clinic, who actually gave me the referral I hoped to get from the PA-C months before to the local orthopedist. He, in turn, referred me to a shoulder specialist down in Franconia....who turns out to be a top shoulder specialist in the country, working with the US Alpine ski team.  I am at the moment recovering from having bone spurs and a cyst caused by them removed. Tomorrow I start PT....hopefully it will not be long before I can actually start lifting. Gods, I'm dying to start lifting.

Not knowing how limited I'd be for work, we also began plans for a festival, Là Fhéill Macha, that I had felt nudged to do a couple of years before, despite the fact we now no longer had Misty to be the "central mare" of it. I had hoped to find a few others up here who might be willing to actually help with some of the work involved, but that hasn't happened. And due to the shoulder I haven't been able to do much of it myself. Chances are that this year anything we do will be small, friends-only...we'll see how things progress. I do feel this is something that needs to happen, it's just a matter of whose timetable that is on.

We've had some healing to our pack, although it started rather, uh, "pridefully" I guess you could say. To back track, we adopted a black cat who was named Merlin a year after we adopted our dog Sachairi, who left us two years ago now, from the same woman. She had moved out of the country, but returned for a visit to find the cat was not in as good a situation as she hoped and we decided to take him. We tried renaming him in Gaelic but it never really worked. We never intended to get a cat, as we often have hounds who are not cat safe, and we certainly didn't intend on ever getting another. But I happened to find out an acquaintance was looking to rehome her elderly black cat as she was moving out of the country. As this was the 1) the same situation as the previous, 2) something I came across right at the right time and 3) the cat's name is Nimue....I figured it was fate. Despite the fact that neither cat was well socialized with other cats, we took her. 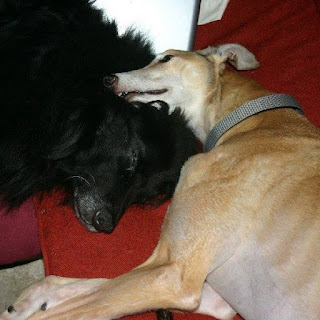 We came home from picking her up to find out that the Greyhound kennel was expecting several dogs in and just had a return, as well. I was asked if we might want the boy who was returned, but he tested as not cat safe. It turned out that he is also Gráinne's half-brother, about half a year younger than her. I also remember him as having been previously adopted around the same time I first heard that she had been returned and was feeling sort of "called" to consider her ....it was a few months before I did, however. So despite our reservations at having a hound who is not cat safe, we now have this 80 lb blond snuggly goofball named Cairbre (one of the legendary Gráinne's brothers and close enough that we can let those unwilling to try saying it continue to call him "Copper" as he had been known).

It will, of course, be longer before our little herd grows again. Horses are a bigger investment, also harder to integrate than dogs. Easier to integrate than the cats have been, we certainly will not have a photo of them like the one of the dogs here, but bigger and more problematic while they do. Saorsa has bonded well with the little guys. The worry, of course, is that the little guys turn 30 this year and their health is not great.

Now that we are healing, now that my shoulder is healing, I am hoping to get back to rebuilding my fitness business and taking clients once I am back in training and feeling I have something to offer others. I am also looking at online training options, to expand outside this area. I am also considering doing a Patreon for the Hooded Crow project if I can figure out what to actually offer which means getting back in the swing of writing, mostly, I guess, but hopefully will include options to do fitness training focused for this path as well. I have a couple of workshops I need to finish prepping and figure a way to do from up here in the sticks...again, probably online.

I am, however, considering that in my writing, I need to put focus back on the book. I may still get out some articles again, I do hope to blog more both here and at the SCCS.