Save a Celtic hound 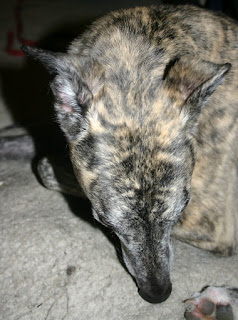 **UPDATE: I realized I should update that we were unable to save our Gráinne. The lymphoma was just too aggressive, she went down hill very quickly and had some sort of episode involving either a lesion or a blood-clot to the brain. She regained her ability to walk after the first one, but the vet was clear that nothing could be done. We planned to take her for her last trip a few days later, but she had another similar episode and we took her to an emergency vet in the middle of the night. We probably do not have to mention that we are devastated as is Gleann. **

It been a hell of a year. We lost Sachairi just over a year ago, then found out both Gleann and Gráinne had serious health problems.  Gráinne was diagnosed with chronic lymphocytic leukemia (CLL) but her blood count numbers were real low, so during the summer it was a matter of just keeping track while we concentrated on saving Gleann who had a tumor in his parathyroid.  We were able to get surgery for Gleann thanks to fund raising, auctioning off some Sarah Connor related stuff, some eBay auctions, help from a dear friend and totally maxing out CareCredit.  And then Gráinne's numbers got higher, not OMG start chemo NOW higher, but high enough we were starting to get her evaluated the first of this year.

And then two things happened. First she developed skin lesions, upping our worry even with the current blood counts.  And then my husband Aaron broke his leg. Oh, on top of that at New Years just 12 days before his accident, he had also had his status changed at work from covering stations to only being on-call for transfers, so no disability benefits at all. This leaves us with no real income at all, except for a bit here and there from eBay sales.

Just days before we finally got her to the oncologist for another examination and for more testing, her nose became hugely swollen. It turns out that as well as the CLL she has cutaneous lymphoma, which is the more aggressive of the two. 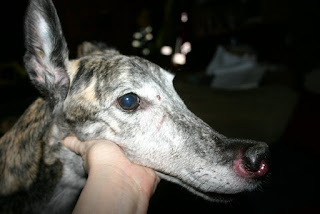 This means that the chemotherapy we were looking at, Prednisone and Leukeran, is not going to be effective. Instead we need a more expensive chemo, CCNU. She would get this every three weeks at $695 each time and require blood work at her regular vet in the weeks in between.  AND this needs to start immediately, before the very quick changing lymphoma has a chance to get to the point of no return!

We could see managing if Aaron were working and getting a lot of shifts....but not until then.  Which is April! And we have to stat this week!  We have raised not quite as much as we have spent in getting her tested and we are struggling to also feed her and the other animals, so we have almost nothing left to our names at all, let alone enough to start this! We really need help! 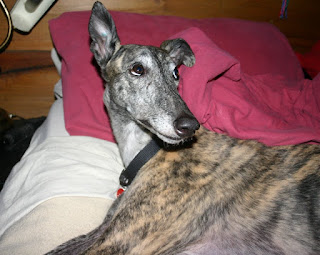 She could have years more with this, it is devastating that we may have to lose her just because Aaron broke his leg!


Gráinne is our sixth Greyhound, adopted from Greyhound Placement Services, NH as a special needs dog due to having epilepsy.  She is beautiful, as you can see, but also quirky and comical. She is not always the easiest hound to deal with, her previous owner has returned her due to her singing in her crate. Honestly, it really is singing, it's like having a coywolf in your living room.  She can be very vocal at anytime she feels she's not being understood. Not everyone appreciates that as much as we do. 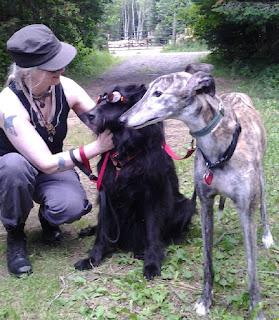 She has had a stressful year, losing Sach was a blow to her, I know. She was stressed as we took care of Gleann's situation. I feel like we had just gotten to the point where we could all relax and enjoy time together when she got really sick.  I don't want this to have been her last year! I want her to get better, which she has a very good chance of if we start treatment this week, and have a couple of relatively happy years. She just turned 7, she needs more time!

And Gleann needs more time with her. He adores her, he's lost so many packmates in his lifetime.

Please share the campaign and please help with what ever you can!

My articles and workshop vouchers are available as perks.

The Celtic Hound reference is....because they are!

Posted by Saigh at 7:22 PM No comments: Links to this post 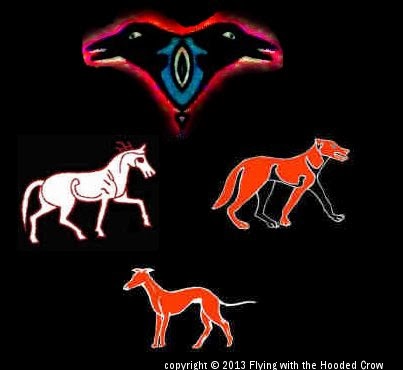