Sometimes the hardest part of writing is the writing, sometimes it's about finding the time. As I'm not working full time, I have the time, but couple that with living in a rural area with a library which seems unable to ever get anything on inter-library loan, it's often getting research material. There are, of course, some great online resources which I use extensively, Corpus of Electronic Text (CELT), Celtic Digital Initiative, Archive.org and JSTOR (which now allows for some access to those of us far from university libraries for example. But books still under copyright tend to be a bit pricey. 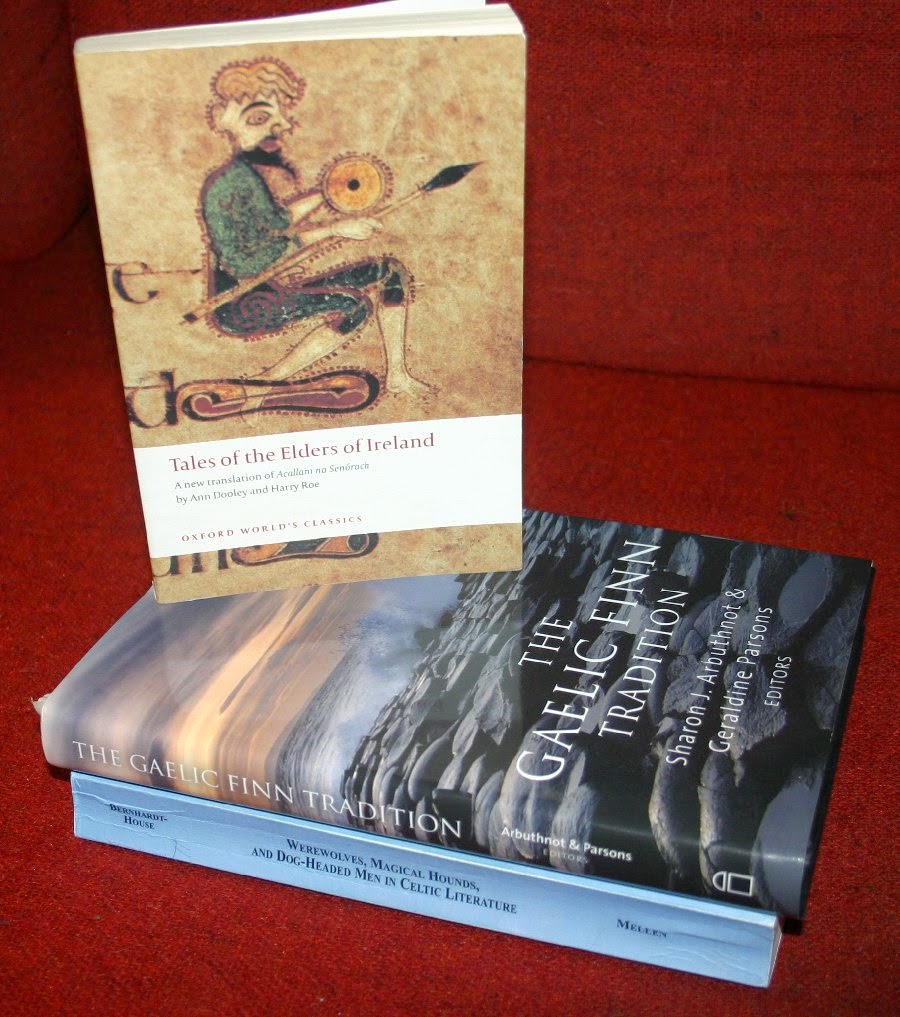 So taking Maya St.Clair's, who blogs as Irish Thoughts and Musings, reviews books at Celtic Scholar's Reviews and Opinions, is a cohort at Air n-Aithesc (and really does most of the work) and runs ÁRCHÚ -Anti-Racist Celts and Heathens Unite FB page, advice I put up both a "tip jar" (aka PayPal) and an Amazon.com wishlist link on the side bar here. You know, in case anyone who reads this blog and website or my other writing that I don't get paid for wants to let me know they found value in it.

And then Maya promptly bought me a copy of The Gaelic Finn Tradition edited by Sharon J. Arbuthnot and Geraldine Parsons, which I felt was likely vital even before reading Maya's  review in AnA.  I have only read a few of the essays, starting with McCone's and Nagy's, naturally, but feel it is, indeed very useful. It does make me wonder what happened to the proposed updating of Nagy's Wisdom of the Outlaw and McCone's upcoming book that he refers to, The Romulus Syndrome.

John M.E. Machate of Trials of a Féinnid was kind enough to make a donation as well, which enabled me to finally get a copy of Phillip Bernhardt-House's Werewolves, Magical Hounds and Dog-Headed Men in Celtic Literature: A Typological Study of Shape-Shifting which I felt was mandatory for Teh Project and wish I had had for "Going in Wolf-Shape" in the first AnA.  It should allow me to punch up a future AnA piece, however. For personal reason around this, I used the rest to make a small donation to a horse rescue.

Domi O'Brien of Grove of the Golden Leaves, DANA, who already keeps me well stocked in fiction which I will be passing on or donating for fundraising, gifted me in triplicate, which is in keeping. She gave me a Kindle (hence it's not in the photo...and no, I haven' succumbed to buying a device but instead have it  on my PC) of An Introduction to Early Irish Literature by Muireann Ní Bhrolcháin which I wanted to check out as a possible background reference and because I'm wanting to update my general reading list a bit, having realized that much of it dates back to my college days 20+ years ago and some was old then. Again, Maya's review a couple of years ago made me interested. So, no not everything I might list will be specific to the topic of Teh Project.  I am finding it quite well put\together, even if she considered Nemain one of the Morrígna, which simply is not borne out by the literature...related, yes, one of, no...one of the Badba, kind of...because it's all tricky like that. She makes up for this in her section on the Fenian matter, by referencing the work Nagy and McCone have done relating these stories to canines and actual warbands, which is still rare to find.

Domi also gave me enough money to renew on of my  URLs which I had been debating whether I would or not (but many still link to it....I might not renew it next year so if you use cyberpict.net to link to my website, it's now dunsgathan.net and the older one resolves into it) as well as buy Anne Dooley and Harry Roe's Tales of the Elders of Ireland: A New Translation of Acallam na Senórach as the AnS is rather vital to my work and this is considered an excellent translation. I have yet to delve in, however.

So, thank you, Maya, John and Domi!  I hope you are going to appreciate the work you have helped move on. ~:) And, yes, I am working on it all.

I should also note that there have been many people who have helped me get articles that I could not otherwise get. I have not had a chance, however, to make sure they were all okay with me mentioning their names here...I will, however, at some point thank those who do agree publicly.
Posted by Saigh at 1:41 PM 4 comments:

Women Warriors and Excitement over Non-Evidence

I actually posted the following on the Facebook page, which this will then be posted to via Networkblogs, so sorry for those who have been hit multiple times. ~:p  But it was long and I figured I'd repost here where it will also stick better. I've also done a bit of editing on it. I'm also avoiding working on a post on contemporary issues, I'm having a lot of trouble with the post and am not sure it will ever see the light of day. So...


You may have noticed I didn't get into the excitement over the whole "half of Viking warriors were women" headline that has been running around Facebook so cheerily. When the study was announced awhile back in a somewhat more realistic, although only slightly, spin, I did read the actual study...which is why I largely ignored the posts...because I didn't want to go through doing this here, Tracy V. Wilson does a better job than I could have, anyway, so now that she has I will elaborate a little on my issues with such hyperbole.

It doesn't help in our quest to find evidence for female warriors to take findings out of context. Putting them in context is so very, very hard to begin with. This study did demonstrate well how our expectations regarding migration are often wrong, as well as show that we cannot determine sex or gender based on grave goods.

Sexing graves using bones doesn't always us the full story either, however. There may be a number of reasons, either cultural or personal, why a sword might be in a woman's grave other than her having been a warrior. No matter how much we might wish that was the reason. Even evidence that someone died by violence or had been wounded and healed from an earlier battle does not mean they were a warrior, civilians are killed in war every day and sometimes those who are not trained choose to fight when it comes down to the enemy being in your home. To know if someone was a warrior also requires a careful study of the bones which would determine long term physical changes which might come from training. Depending on the condition of the remains, this is not particularly easy to determine. If the person died young, as many warriors did and do, it might not have  been evident yet.

Of course, there is also the matter of gender as opposed to biological sex. Transgender is not new, what is new is that we now have hormones which can make some changes to the body which if started young enough might actually give future anthropologists some clue. So an apparently female body does not actually mean someone who lived as a woman....nor does an apparently male body mean someone who lived as a man. While cultural clues may give us some indication if it's likely, much of our cultural information comes from biased sources so it's, again, impossible to fully determine. It's also difficult to determine from bones if someone was intersexed which might also cloud what gender that person identified as or was identified as in their society.

Truly, I wish the evidence could be so clear. My heart did give a little flutter at the headline even at the same time my brain said "nah, you know what this is about." I know women fought, that we have always fought. The evidence is there. But it's open to speculation. We cannot prove it. All we can really prove is what we can do now and in the future which, itself, is evidence that we've always done this.
Posted by Saigh at 2:38 PM No comments: