Re-publication re-announcement: By Blood, Bone and Blade: A Tribute to the Morrígan second edition

After some mistakes were discovered  By Blood, Bone and Blade: A Tribute to the Morrígan was pulled from publication while they were fixed.  It is now back out and available again!  Those who want to read my essay "Musings on the Irish Goddesses of War" this is where you find it! 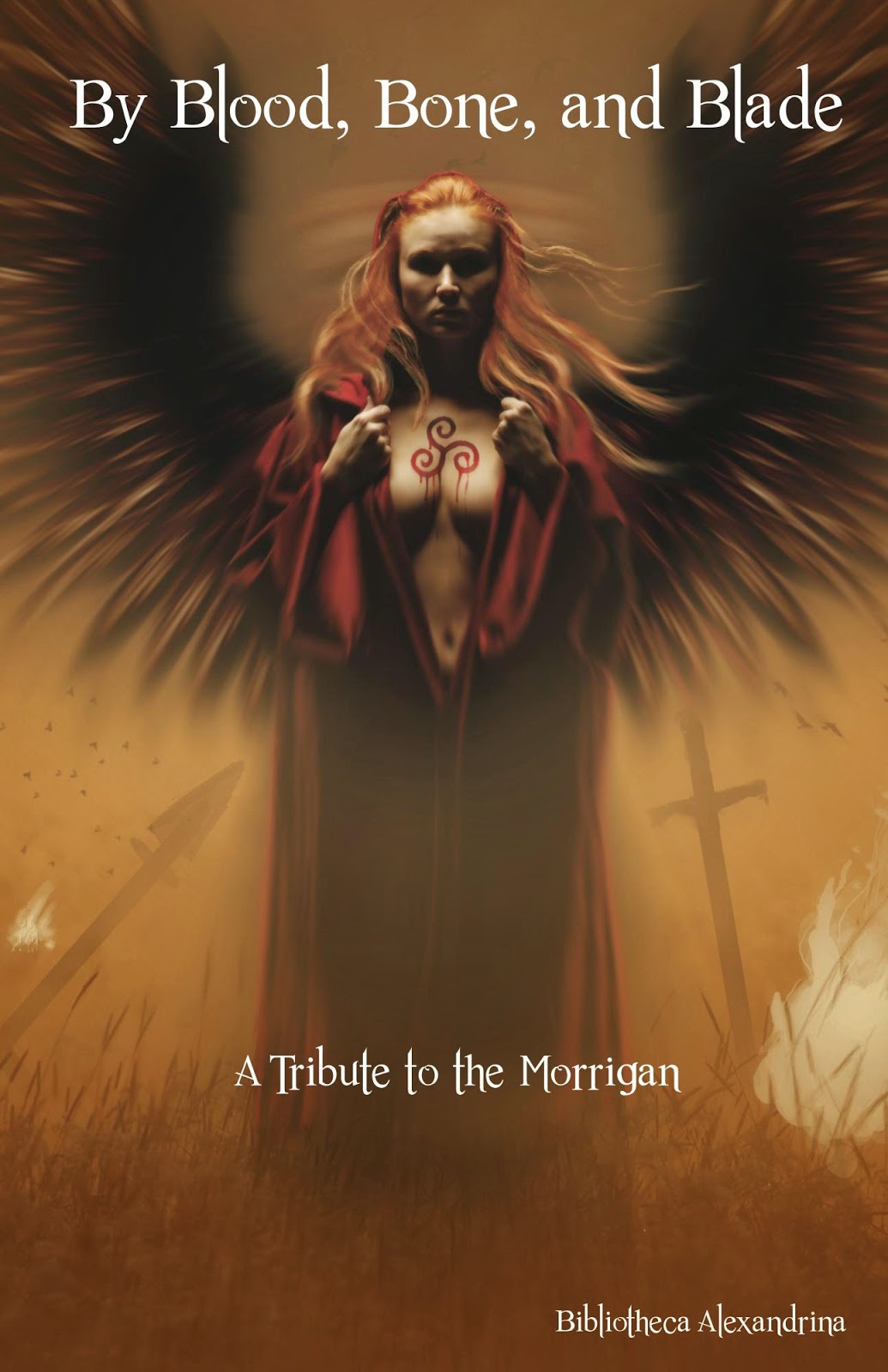 Posted by Saigh at 1:31 PM No comments: Links to this post

The Morrígan and Cú Chulainn pt. 3: Of death and dog meat

When I did the first two sections of this "series" "On Saying 'No'" and "Insult and Praise as Incitement" I only touched briefly on Cú Chulainn's actual death, just to note that the two encounters discussed in those posts are not reason that the Morrígan killed him...as many claim She did.  I had noted in the first part that She was not the Badb who brought about Cú Chulainn's demise and in the second that he did not die during the Táin Bó Cúalnge and that Her "predictions" of such a death was actually to incite him. I had intended to discuss it further here, yet never finished, perhaps partially due to the loss of my own Cu, a Greyhound, shortly before starting this series and then the illness and loss of my other Greyhound. But as I again was asked about "if what you wrote was true, why did She kill him?" and, of course, "how can you worship a Goddess who would serve dog meat!?!?!?!?" I guess this is overdue.

I did note briefly in "Musings on the Irish War Goddesses," that there is a confusion between the Morrígan and one or three Daughters of Cailitín, who CC had killed, and possibly even a third being, who might be the Morrígan or Badb or...not. (Lambert, pg. 119). PSV Lupus went into this issue a bit more in one of es essays in the same anthology (Lupus, pg. 36-38) as had both Angelique Gulermovich Epstein and Kim Heijda in their academic work (Gulermovich Epstein, Ch.2; Heijda, Ch. 4.2). However, as the alternative that it was the Morrígan/Badb who killed him is frequently repeated, I feel this needs to be as well. Especially as I do have a canine focus in my form of worship and service to the War Goddesses which makes the dog meat thing particularly negative if that were Her.

Which, of course, it wasn't!

The problem seems to arise from the reasonable, as it happens several times in the texts (and as I discuss in "Musings," pg. 103-105), conflation of the Morrígan and Badb combined with the not so realistic idea that "Badb" always means the Goddess who is one of the Daughters of Ernmas. The name, or title, might actually be held by many beings, sometimes in the plural, and might be intepreted as meaning something like "witch." (Lambert, pg. 101; you could say Heijda's entire thesis is about exploring the variations of this title).  This notably includes one or three of the daughters of Calatín.

Calatín Dána and his 27 sons and a grandson fought and were killed by Cú Chulainn during the Táin Bó Cúalnge (TBC, pg.69-71, 209-211), his wife then gives birth two three sons and three daughters who in the end act to bring about CC's death. (Hull, pg.235-263).  It is his three daughters, one or all three called "Badb," who offer Cú Chulainn the shoulder of a hound to eat, causing him to have to break either this geis against refusing food if he went near a cooking-hearth or the one against eating dog meat. Taking it causes the hand he ate from and the leg which he put the rest under to wither, making him vulnerable and weak.(Hull, pg. 254-255)  It was, therefore, not the Morrígan at all who caused his death and certainly not She who gave him dog meat.

In fact, an Morrígan's actions in regards to Cú Chulainn's coming death was quite the opposite. The night before he goes out to his last battle, the Morrígan damages his chariot, as She did not want him to go to battle for She knew he would not come back.(Hull, pg. 254) This is not the act of someone trying to destroy the hero, but instead trying to save him. Because She did not hate him, as this never dying modern belief attests, but loved him so.  He was Her Hound!

In this story is also the Washer at the Ford, ingin Baidbi (Badb's Daughter) who mourns his coming death.(Hull, pg. 247) Both Epstein and Heijda believe She is the Morrígan or Badb, as does Lupus. (Gulermovich Epstein, Ch.2; Heijda, Ch. 4.2; Lupus, pg. 37)  I'm personally intrigued by the possibility that She is another family member, Badb's actual daughter.  However, this is largely a UPG thing to explore, with no way to truly know. Whether they are one and the same or relatives, it is clear that both the Morrígan and Badb's Daughter did not wish Cú Chulainn dead, but at one point tried to stop it and in another lamented.

The crow that lands on Cú Chulainn's shoulder is also not noted in the text to be the Morrígan; the clearest actual purpose in the tale is that a carrion bird landing indicates the hero is, indeed, dead. That it was the Goddess claimed by Hennessey, while Hull made a note that in one version it was Calatín's daughter making sure CC was dead). (Hennessey, pg. 51-52; Hull pg. 160) Yet the term is ennach, not badb (Heijda, Ch. 5, Gulermovich Epstein, Ch.2). Lupus argues that there is no reason to interpret the crow as the Morrígan, while   Epstein notes it's a valid interpretation given their relationship and notes that in Rec. 3 of the TBC the Morrígan is said to take the form of an ennach. (Lupus, pg. 36-37; Gulermovich Epstein, Ch.2).  Heijda's take is that it is clearly not the Goddess Badb, probably not the Morrígan (she is a bit more convinced of Them being different than most), is may be Catalín's daughter as Hull notes, as the daughter had appeared as a bird previously. (Heijda, Ch 5)

Myself, I still tend to agree with Gulermovich Epstein on it being the Morrígan. While to some extent this is from Gulermovich Epstein's arguments, I admit it is also a bit UPG. It makes sense that the Goddess, as his patron as I feel the evidence indicates She is, would be with him at the end.  Not to celebrate or gloat as some claim, or as the daughter of Catalín would, but to mourn, to perhaps protect him. This would mean, of course, that perhaps one thing She said in the Táin Bó Regamna truthful, but meant differently than it might seem in the context of that tale, “I am guarding your death, and will continue.”


See also: The Morrígan and Cú Chulainn: On Saying "No"

The Morrígan and Cú Chulainn pt. 2: Insult and Praise as Incitement

Eleanor Hull, “The Tragical Death of Cochulainn” (from Whitley Stokes's translation),  “The Great Defeat on the Plain of Muirthemne before Cuchullin’s Death" (from Hayes O'Grady's translation), The Cuchullin Saga in Irish Literature: being a collection of stories relating to the Hero Cuchullin, London: David Nutt on the Strand, 1898

P. Sufenas Virius Lupus, "The Morrígan and Cú Chulainn: A More Nuanced View of Their Relationship,"  By Blood, Bone and  Blade: A Tribute to the Morrígan Nicole Bonivusto, ed,  Ashville, NC: Bibliotheca Alexandrina, 2014

Copyright © 2014 Saigh Kym Lambert
Posted by Saigh at 6:09 PM No comments: Links to this post

Yup we did it! With Maya St.Clair doing the bulk of the actual work.  We got issue two of Air n-Aithesc published! 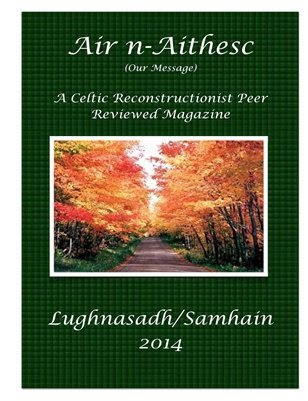 We have the art of Paul Borda, we have Maya examining what CRP methodology is, we have Irish witches discussed by Morgan Daimler, we have Ceffyl taking about developing a personal relationship with Deity, we have poetry by Finnchuill and P. Sufenas Virius Lupus and we have book reviews by Maya, Finnchuill and Blackbird O'Connell.

And yes, I have an article entitled "Muimme naFiann: Foster-mother of Heroes" where I discuss the storys of Scáthach and Finn's variously named foster-mothers...or rather where they come in in the heroes' stories as they sadly have none of their own. This is, of course, always a part of this project I'm doing here.

You can order through the website or just go to Magcloud...you can, of course, still get our first issue if you have missed it.

Posted by Saigh at 3:10 PM No comments: Links to this post