As noted in my last entry, my mate and I went to Chicago ComicCon in August, with the primary mission to meet Linda Hamilton and other women who have been role models of strength. Along with "Sarah Connor" these included her roommate "Ginger" Bess Motta, Kristanna "Painkiller Jane" Loken, Lindsay "Bionic Woman" Wagner and Claudia "Commander Susan Ivanova" Christian.

It's really quite difficult, and likely not just because of the Mercury Retrograde (which is over now, but we're still in the shadow for the next couple of weeks), to really discuss this. Photos and ZOMG! is about all I've managed so far. There's always going to be a lot of emotion when you meet someone you've admired from afar for so long. But with some it was more difficult than with others. Lindsay Wagner was an emotional meeting for me in a different way, so that first.

As a teenager, I idolized Wagner's Bionic Woman role "Jaime Sommers" much as I now do Hamilton's "Sarah Connor." I was, after all, very much the pacifistic, hippie Witch at the time, a strong female role model that eschewed violence was perfect. Certainly, the message that if one is strong enough, violence isn't always necessary even in responding to violence, still holds for me. But I'm sure Wagner would be horrified by some of the choices I have made in my life, things I promote to defend ourselves. Certainly my 16 year-old self would have been!

During the panel with Wagner and Richard Anderson, who pl

ayed her boss Oscar Goldman, the theme came up a lot. He brought up her sensitivity to violence, the ways that caused the show to differ from the Six Million Dollar Man. Prompted by a fan, Wagner described her character's way of dealing with things as distinctly "feminine." Any of my readers are likely to know that engendering such things pushes my buttons, but I certainly wasn't going to get into it there. But it gave me much to think about, especially about my feelings of disconnection in meeting her and the feelings of sadness about it. Which was made all the more sad because my late mother was a fan, we had watched her show together, and it was perhaps the only action show we both enjoyed.

And, yet, as noted in a previous post, the character helped shape my interest in women's strength and in the idea that being strong does give us a better chance to be safe in the world. Yes, maybe it even means not having to always resort to physical violence, because our options are greater, we're less likely to feel we can't avoid dangerous encounters if we are aware of our own power to get out of them if we do.

Strength, in all ways, is clearly demonstrated by the very first of the actresses I met, Kristanna Loken. While you all may know Terminator 3 was not may favorite movie, I did become a fan of Loken when she was in the television version of PainKiller Jane, a very different version from the comics, but with a lot of power and ass kicking. Loken's passions are evident in her work with several charities, especially involved in helping children. Among recent movies she has made Darfur and is currently working on Love Orchard that confronts the issues of migrant workers whose families are often torn apart by current laws. Fans can become involved in this movie through the Kickstart link on Kristanna's website as well as find information on her charities and other activities. Kristanna obviously doesn't just play strong women in movies and TV, she lives it.

While we then waiting in line to meet Linda Hamilton, she went on break. Others in the line were gracious enough to let me slip out to meet Bess Motta, who was Ginger, Sarah's roommate, in The Terminator. She was also one of the 20-Minute Fitness instructors in the 1980s, and is still a fitness instructor today. That she's keeping up that part of her career is quite obvious, as she's probably as fit or fitter than she ever was. She was a delightful person and seemed to be having a great time at the con herself.

The favor we got was paid, um, backwards as the women who were behind us and saved our spot had theirs saved by those behind them while they went to see Michael Biehn. I'd been warned that fellow fans in these lines might be nice during what may be a long wait.

Okay, so yeah.....here we go! Trying to describe meeting Linda. OMG! I can't. It was amazing. As I was picking out pho 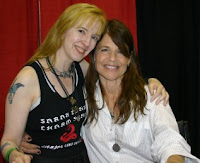 tos and paying for the autographs with her assistant, he has commented on the shirt (the shirts got many comments, actually...including one guy who did ask if I had more than one on Sunday, which I did, btw). Linda quoted the "siempre como culebra" and explained to him that it was from T2 and what it meant. After that, it's sort of a blur.

As the shirt was already brought up, I babbled a bit about The Sarah Connor Charm School, of course. And the prerequisite, "what an inspiration you were" stuff. When I noted the purpose of the SCCS, which is also the purpose of this blog, to pass on inspiration to other women to find their own strength, Linda said, "In the end the only thing we have is our own strength." Gods, mine pretty much was gone, but I managed somehow to stay upright, get the

autographs and some photos with her. Oh, there was also a bit of "looking so forward to seeing you on Chuck" and her saying she was excited about doing the show too.

I also told her that I'd be back because I had a gift for her. This being my first con, and with some of the things written up, I wasn't sure if this was okay, but she was open to it. The next day I did see her, Bess and Kristanna along with Michael Biehn very briefly as we went through for our professional photos which I still need to scan. We also went to the Terminator panel, with Linda and Michael, which was delightful. They were very open about not liking the later two movies all that much, he especially did not mince words. A number of fans seemed thrilled to know that the love scene in the first film was uncomfortable because they did have feelings for each other and spouses who knew it and were there. But for me, I was touched by several other women who told her how much Sarah Connor was an inspiration of st 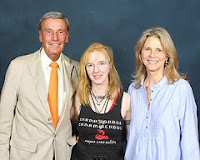 rength, especially one who told her that she helped her through a really difficult time in her life. This reflects what I wrote earlier. This is why these roles are vital to us, we need role models.

I did learn a few very important things to keep in mind if I go to a ComicCon again. The most important is stick to the panels and avoid the floor on Saturday. That's when most people are 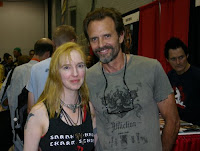 there. Yet, I did have a professional photo with a different photographer, who offered jpgs as well as prints, on the floor (the Terminator ones were where the panels were) with Lindsay Wagner and Richard Anderson. And the Terminator actors were all across from William Shatner and other Trek stars, so between the two the aisle there was jammed packed. We did manage to get back to se

e Bess and to see Michael Biehn. So, yes, I did get photos and autographs with two men, so see I'm not sexist because I have token male representation here! *snerk* Bess even asked us to pose with her for a photo for her FaceBook page!

The next day things were a little calmer. I also got to mee

t Claudia Christian, of Babylon 5, whose Commander Susan Ivanova was another ass kicking woman. And Lisa Loring, the original Wednesday Addams. Yeah, maybe not an ass kicker in the same sense, but those Addams, and Frump, women were not afraid of their own power. She was delightful to meet, and of all was the first of these celebrities that I was a fan of.

But, of course, the highlight was again seeing Linda, this time with the certificate from the Sarah Connor Charm School to present to her. She even remembered how I spell my name, for when she autographed the group Terminator photo she noted that Michael Biehn had spelled it wrong. (Bess noticed too!). I showed her the certificate and she seemed thrilled by the words, saying that she'd treasure it for ever. 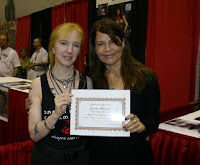 It reads:
Certificate of Appreciation
Linda Hamilton
The Sarah Connor Charm School
thanks you for your inspiration to women
to be strong, prepared and save ourselves, our loved ones, the world 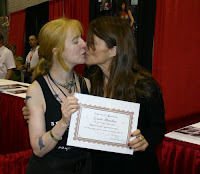 Do I even need to say there are no words?
Posted by Saigh at 7:43 AM