Year of the Gun: Third Step, Self-Protection with Handguns (SPwH)

It seems to take me at least a month to write these up, which probably seems a long delay. This time is even longer and I have the excuse of not having much online access, but that wasn’t so in the first two. The real problem is that I just feel overwhelmed to find the words to do these classes justice. It just seems impossible to convey either the fun, especially of a shooting focused class like this and Basic Handgun, or the sense of empowerment they and Responsible Use of Lethal Force, give...albeit a very grave empowerment. Given the reality that is the focus of that second class, it also gives me a bit of trepidation into even trying to express how much damn fun the 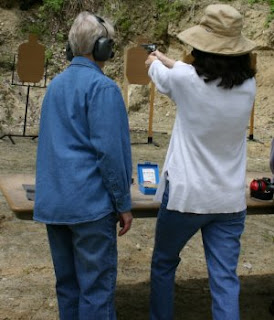 shooting classes are. It seems odd that preparing for something you hope never to use should be such a rush. But they are. It's fun to learn, it's empowering to take on the knowledge to protect ones own life and that of others, it's beyond intense to consider the responsibility of it.

Of course, all these things are true of non-firearms self-defense training and martial arts as well. But with the guns you have, excuse the pun, the bang!

In early June, we returned to the Harvard Sportsman's Club to do the next step with AWARE (Arming Women Against Rape and Endangerment) Self-Protection with Handguns. AWARE VP Lyn Bates again led this class, assisted by Barbara Clorite, Jim Roberts and Roger Lanny, with Lanny joining the class later in the day when Roberts had to leave early. There were six students, giving us an excellent 1 to 2 student to instructor ratio, allowing for a great deal of input and answers to questions through the whole class.

The class started in the club house, with introductions. This time my mate was the token only male student, the other students ranging from the MA coordinator of Second Amendment Sisters, Inc. who has been shooting for awhile to a woman who grew up with guns but wanted formal training knock off some rust to those of us who were new to shooting including one woman who was still unsure if carrying for self-defense was really an option she wanted to take. We then had an overview of basic safety and issues, before heading down to one of the outdoor ranges. 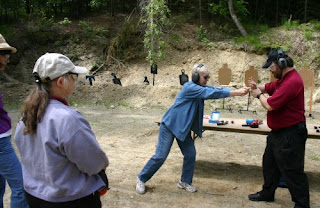 This is when the real fun began?

After all but two of us, who had their own weapons, found our loaner guns, we started with a demonstration of the basic Isosceles stance, with both arms out in a triangle, which Lyn demonstrated with Jim helping her show the importance of putting weight forward to maintain balance, something some of us *ahem* could have done better at. After all, as Jim noted in an aside discussion at one point, this is the basic stance in nearly any self-defense or combat Martial Art system. I plead nerves as a beginner shooter for still standing too far back, according to the photos (which you will never see) and am glad I have those photos to remind me. We began our shooting in this stance.

Lyn then went over t 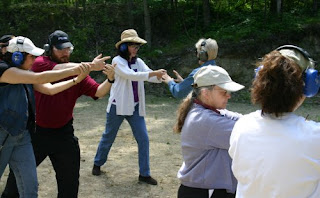 he Chapman or Modified Weaver stance, where the shooting arm stays out "like a rifle stock" while the other bends down to secure the hold. The class was fairly evenly divided in which each of us found most comfortable or felt was a better stance for us. I found that while the Chapman was a bit less "natural" to me, it seemed a more secure hold and will likely be the one I practice most to make it more "natural" in the long run. This is despite the fact, that after shooting mostly left-handed in the Basic Class, I exclusively shot right-handed this time making me cross-dominant. This does give some disadvantage, it seems in sighting. We'll see how things go with practice. 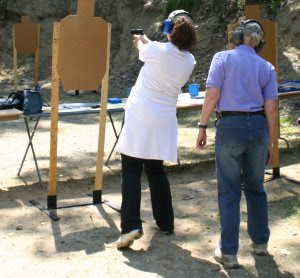 We moved onto how to move, both to remove ourselves from another's line of sight and to evaluate the over all situation. This exercise was probably a bit easier for those who know right from left, which I have a huge problem with as I'll note in a moment. However, the couple of bumps that we took, with us all at a safely lined up, also gave us who had them a sense of the importance of keeping our fingers off the triggers when not shooting...and a reminder that if we manage that, the gun won't just go off by itself because of a slight bump. 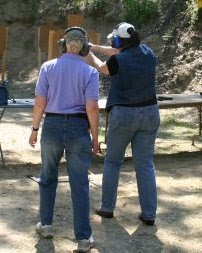 We then shot from concealment, relating to the cover exercise that was part of RULF. Figuring out a bit, with guns away, did and didn't work to hide us from our targets. We then shot from behind targets, from both the right and left sides, which gave some of us some clues that one might be less advantageous for us than the other was...something to keep working on.

To add another level of reality, the time factor, we got to shoot metal targets, so we could hear when the shots hit, with a timer. Then that was upped by having two of us compete. This gave each of us some sense of how pressure and adrenaline might affect our speed and aim, with some doing better and some worse. Again, information for future training. And a good example of why defensive shooting competition can be an important element of preparedness. One student also learned that so 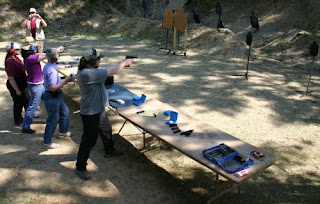 me makes of electronic ear protection seem to decide to block the buzzer too.

We also were reintroduced to the phone and lock-box scenario, now getting to act it out with a live gun. We were giving options on how to go about the exercise, based on our knowledge of local response systems and with the knowledge we'd received. Mostly it came down to get gun out, make call, pick up gun, but anyone who could juggle it all would probably have an advantage. I felt rather proud of myself for I was "on the line with 911" with the gun in my other hand when informed the intruder was breaking through, I just started shooting, one-handed, while dropping the phone and bringing my other hand up. Lyn noted that I got at least two good chest shots while still one-handed. I admit, I paid for it a bit with a bruise under my thumbnail where got hit by the moving slide but I didn't feel it until the next morning and certainly better than what might happen in such a scenario if I hesitated.

The last shooting was "the decision" with photo targets, each of us turned away while they put them up, and then we were to turn around and figure out if firing was appropriate. Many were absolutely clear, and no one shot grandma, but a couple were just a tad ambiguous without more information making those of us who got them, I was one, hesitate for a moment. I still contemplate if it was too long, but I also consider that in the case of my bad guys, it was probably prudent to be sure and they did not have an advantage on speed in the situation. But, I still mull it over.

Each step of this has left me feeling more prepared, more ready, although I know I still have so far to go. This is not to say this is an incomplete class, it was a totally filled 8 hours, with a lot of knowledge shared as well as practice. Our lunch period included instruction and time before and after shooting involved a great deal of sharing and discussion. This included the showing of various concealment holsters and bags and discussion of their various merits and demerits. But there is always more. Some of which we feel now can be easily extrapolated from what we've learned so far...including things like going over the concealment in our own homes and then mimicking things as much as possible at the range.

Of course, there are other AWARE classes, we're still hoping to get shotgun ones if anyone is interested (the more who ask for them, the greater the chance they can do them) and Lyn also offers personal instruction and can be contacted through the website. I'm sure we'll be seeing more of her in the future. And we're both considering the possibility, if we can manage out time, of perhaps getting involved in some competition to work on our stress responses. As I said before, this may be the Year of the Gun because the journey is new and we're giving it a particular focus, but this is a life-time journey we've started.

And, just in case anyone does want to see me as well as my classmates: 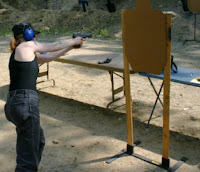 I'd like to thank my classmates for agreeing to appear in this blog and all four of our teachers for their wonderful instruction.